Shimosato’s presentation was about the simulation of SiC MOSFET operation in UIS (Unclamped inductive switching) test. UIS test is to investigate the switching tolerance in circuits with inductive loads. When the inductive electromotive force generated during the switch-off period exceeds the breakdown voltage of the MOSFET, an avalanche current flows even though the MOSFET is in the off state. This phenomenon continues until all the energy stored in the inductor is consumed. If the energy exceeds a certain value, the MOSFET will break down in the process. In this study, the behavior of the parasitic bipolar transistor and the intrinsic operation of SiC due to high temperature were incorporated to the simulation model, and thermoelectric simulation was performed. In the simulation, the intrinsic behavior of SiC was modeled as a resistance whose value rapidly decreases under high temperature conditions. The simulation results were confirmed to match well with the actual measurement results. The simulation results indicated that the failure in the UIS test was mainly due to the intrinsic behavior of the SiC.

Qin’s presentation is on the design of SRAM cells based on organic thin film transistors (OTFTs). OTFTs are promising devices for developing new circuits due to their low cost of fabrication on flexible materials such as films. Organic SRAM is used for data storage in flexible organic systems. However, due to the large difference in drivability between n-type and p-type devices, the SRAM circuit design currently used in silicon cannot be applied to OTFTs. In this study, we use p-type OTFTs as access transistors to improve area efficiency and robustness. The stability of the proposed SRAM has been optimized by SPICE simulation. The actual measurements on a test chip have confirmed that the proposed SRAM cell can operate correctly and stably.

Oshima’s presentation is about the quantitative analysis of threshold voltage fluctuation of organic thin-film transistors (OTFTs) under applied voltage. OTFTs are attracting attention for applications such as wearable sensors because of their ability to fabricate circuits on flexible substrates. However, OTFTs are known to degrade rapidly due to stress voltages applied during circuit operation. Thus, suppression of degradation is a challenge for practical use of OTFT circuits. In order to improve the lifetime of OTFTs, we focused on the carrier trapping in the insulating film and that in the semiconductor layer as the cause of bias-stress degradation, and proposed a method to identify which one has a larger impact on the threshold voltage fluctuation. By applying the proposed method to the measured threshold voltage changes, it was found that the carrier capture in the semiconductor layer was dominant in the p-type device, while both the carrier capture in the semiconductor layer and the insulator were equally influential in the n-type device, indicating that the physical mechanism of degradation was different between the p-type and n-type devices. 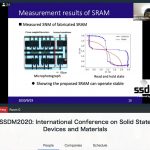 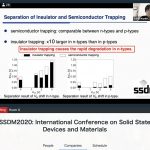